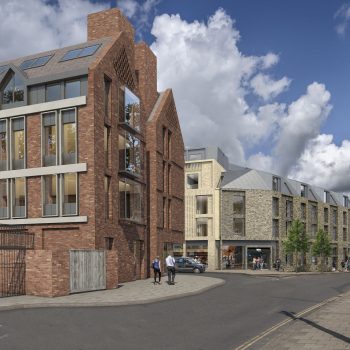 A planning application has been submitted to redevelop the Park Street car park site in Cambridge in to a Wilde aparthotel.

The proposals were submitted on by Cambridge Investment Partnership (CIP) and Marick Real Estate Ltd, and included a bee hotel and green roof

The Wilde by Staycity aparthotel will feature more than 200 rooms above a basement car park, which will remain in the council’s car parks portfolio. The car park will have 225 public parking spaces, and will offer electric vehicle charging with 26 live charging points when it reopens. There will also be 270 covered cycle spaces, including provision for cargo bikes on the ground floor.

In addition, the design proposals submitted as part of the planning application will improve the accessibility and appearance of the existing Jordan’s Yard by opening the space up into a public courtyard with a café, a seating area and attractive landscaping. To encourage biodiversity, insect towers, a green roof for the hotel, bird boxes and a bee hotel are planned.

Cllr Lewis Herbert, leader of Cambridge City Council, said the development would “generate a receipt of at least £10 million which the council intends to use in a future housing and affordable housing investment. The green wall will provide the opportunity to increase the bio-diversity of the site as well as including plant species to attract bees. The concept has been taken from the idea of a bee pit stop designed by Matt Childs and promoted at Kings Cross Station spring 2019.The precise species list will be developed with the consultant ecologist taking due regard of the ecology and aspect of the wall.”

Marcus Boret of Marick Real Estate said: “We are working closely with Cambridge City Council and Cambridge Investment Partnership, statutory consultees, neighbours and the public liaison group to plan the delivery of this exemplar scheme and balance the minimum of disruption in the most expedient manner. In parallel with the planning activities, we will continue to develop and refine our detailed construction design solutions with our professional designers and main contractor.”

Formal consultation by the Planning service will begin shortly, with an extended response time being provided to take account of the summer holidays. A decision on the proposals, following consideration of the application and all of the comments received, is expected later this year.