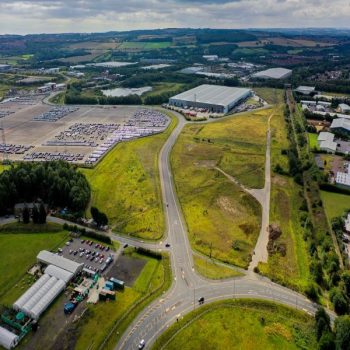 Legal & General announces it has submitted proposals to deliver a £60m business park, expected to create 1,600 new jobs in Sunderland.

Legal & General has filed plans for the first of two phases at Hillthorn Park, which will eventually deliver 600,000 sq ft of floorspace for industrial, storage and distribution businesses, supporting the city’s economic growth.  The application is the first part of a two-phased development, with further units to follow.

If the planning application is approved by the Council’s committee when it meets in June 2021, work on the 25-hectare site in Washington is set to commence in September 2021, with the expectation that Hillthorn Park will be fully built out by 2023.

Paul Edwards, director of asset management at LGIM Real Assets, said: “We are pleased to be able to submit a planning application for Hillthorn Park, which is a significant site that will unlock a range of employment opportunities for local people, as businesses are attracted to locate there.

“Hillthorn Park is one of two significant job-creating commercial developments we are backing in Sunderland, a city that has impressed us with its vision and intent.  We’ve invested some £160m in all, because we absolutely back the Council’s plans to bolster its economy, by creating commercial spaces that will attract businesses, and with them support the creation of new jobs for local people.”

Hillthorn Park is an allocated employment site, which means that it has been earmarked for development for some time.  Legal & General’s proposals will accelerate the transformation of the Washington site, part of which has already been designated Enterprise Zone status, identified by the Government and the North East Local Enterprise Partnership (LEP) in 2012 as key locations for new economic development.

Councillor Graeme Miller, leader of Sunderland City Council, said: “This is an important site for the city with vast potential to attract job-creating businesses, so we’re very pleased that Legal & General is helping us to realise our vision and – through a £60m investment – is supporting us to rapidly advance our plans to unlock the potential of this site for local people.

The site’s status as an Enterprise Zone brought with it major investment – through funding from central government, the North East LEP and the European Regional Development Fund (ERDF) – in new infrastructure and enabling works, which will enable the rapid delivery of the development.

Helen Golightly, chief executive of the North East LEP, said: “It’s fantastic to see the pace with which Legal & General are advancing their plans for Hillthorn Park, and we look forward to seeing the site rapidly transformed into a key business hub, creating hundreds of jobs for people across the North East.”